Chilapata is an extension of the Jaldapara National Park where the habitat akin to rainforests, is spread over a riverine tract criss crossed by Torsha, Holong, Reti, Malangi, Sissamara, Bhaluka and Chirakhawa rivers and punctuated by rich grasslands.

Established in 1941 as a sanctuary to conserve rhinoceros over 141sq km, Jaldapara was upgraded into a National Park in 2012 with 216.51 sq km under the Wildlife Division III of West Bengal Forest Department. The major fauna of jaldapara includes the royal bengal tiger, elephant, deer, wild boar and other species of mammals, reptiles,amphibians,birds etc.

The classical Tour of Buxa touches the destinations of Rajabhatkhawa, jayanti, Twenty Eigth Mile and Santabari with a shorttrek to Buxaduar. The ACT organises homestays in above destinations along with niche areas of Buxa Tiger Reserve like Lepchakha , Chunabatti, Adma and Raimatang.

Apart from these popular destinations the visitors can visit others places such as :

Jungle Safari is the most popular activity in Chilapata Forest.The activity was introduces in 2008 and continues successfully. tickets for the Safari are issued from Kodal Busty abd Chilapata renge offeices. The activity runs from September 15 t June 15 every year. From September to March the safari is held between 6 A.M. and 9.A.M. and again between 2.30 P.M. to 5.30 A.M. to 8.30 A.M. and again betwen 3 P.M. and 6 P.M. , from April to June.

Hiring Gypsys is mandatory to avail of safari. Eco-guides and Tourist Guides trained by the Forest department, accompany the tourists in the safari.

Since the safari route touches the periphery of some of the forest villages of chilapata, a tourist can catch glimpses of the community life of forest villagers during the safari. the safari route eventually passes through the points of Bania Ruin; an ancient fortfication hidden by lofty trees in the jungle, the C.C. Line encompassing vast grassland by the bank of river Torsha and finally through the dense Mendabari forest unfolding the mystery and majesty of the natural and cultural heritage of chilapata forest. 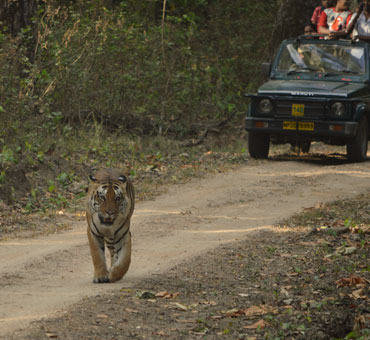